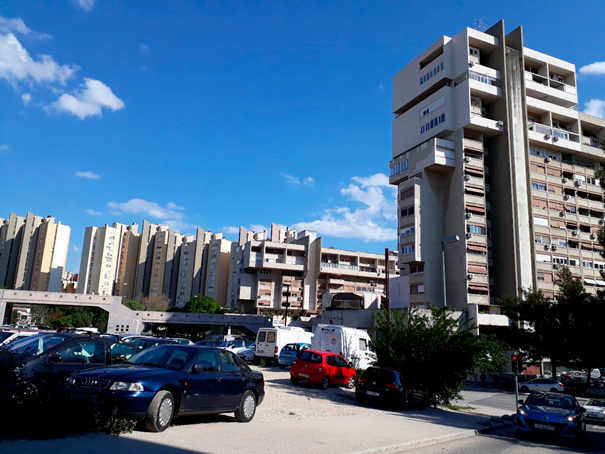 Working in a main Slovenian national research institution in the field of urban planning (UIRS) for more than 20 years I have been lucky enough to be in contact with the »older generation« of the colleagues that were most active in the times of what used to be teh Socialist Federal State of Yugoslavia. In »their times«, as they used to say, the urban planning has been considered as one of the disciplines that have to be grounded on the interdisciplinary aproaches in order to be able to provide good final results, i.e. well thought and viable cities. And the Yugoslay comprehensive planning system that parallely addressed social, economic and spatial dimensions of the development allowed that at least in theory.

This older generation of my colleagues was often very proudly telling me the stories of the so called Split 3 project, which was one of the largest block-housing expansions of any none-capital cities of ex-Yugoslavia, taking place in the second largest cities of Croatia in early 1970s. The preparation of the Split 3 construction program was unique, starting with the concept of building a city rather than a single settlement or a neighborhood – a comprehensive scheme of urban functions was created, not only by architects and urbanists, but by all the organizations in the city including the political, economic and administrative bodies that were providing the data as well as suggestions. Based on such a scheme an urban planning competition was organised and the team from UIRS won it. The winning urban planners (Mušič, Starc and Bežan) foresaw 14.000 apartments for 50.000 inhabitants on a surface of about 340 hectares, with schools, kindergartens, playgrounds, ambulances, department stores, restaurants, hotels and a university campus, all linked by non-motorised streets. The proposed scheme that was then realised during 1970s is considered to be the critique of modern planning as it reintroduces the pedestrian-street as the main theme of the concept. The winning proposal has been also prised for being and example of the humanisation of the large scale housing estates by giving special attention to the arrangement of public spaces to encourage social activities in the neighbourhood as well as to the architectural and landscaping details.

This large urban expansion and construction activities also gave the impetus to the establishment of a university programme in Split, first in a form of a civil engineering department of the University of Split, followed by the architecture and urban planning departments within the same faculty, which later on got upgraded further with the geodesy and geoinformatics department.

These (Split 3 and the co-existence of the three study programmes within the same faculty) were the two reasons for me to undertake an STSM in Split. I aimed to reveal how the faculty is trying to provide an interdisciplinary approach to urban planning nowadays in the socio-economic realities that have changed a lot since the construction of Split 3. As well as to make an on-site observation of the Split 3 project which was so much prised in the professional literature and among my colleagues.

The start of the STSM was rather dramatic. When I was driving along the nearly empty Croatian A1 highway it was raining cats and dogs. Additonally the strong bura wind was blowing. Knowing the Croatian coast in its summerly edition from before this was an unpleasant surprice and an unexpected introduction into the STSM. However everything turned into the opposite direction the very next morning when the warm welcome by my host and the wider team of the Faculty of civil engineering, architecture and geodesy immediatelly made me feel the travel was well worth doing it. The combination of the library research, reviewings of the study programmes and above all the interviews and informal discussions with the faculty staff provided the insights into how the university and the city of Split were growing hand to hand to each other and how crucial the link between the two was. They have also revealed the importance of the collaboration of the different professions that was initially needed in order to implement the grand-scale project of Split 3 and has been preserved until today by keeping the different study programmes co-exist and enhance each other within one faculty. In the short 10 days of my stay at the faculty I could feel the spirit of cooperation between the departments and their teaching stuff. Also the official interviews proved the importance of the fact that they share the same space (building) as well as administrative structures which enable a close cooperation among them. Based on this observation it did not come as a surprice that the newly developed studies related to sustainable development were proposed as a joint venture of different disciplines/departments.

And what about Split 3? My lived experience proved some mismatches between the »legends« and the reality. Without any doubt this was the project of somewhat enormous dimensions that can not be paralled with any similar development in the last few decades of the development of the post-Yugoslavian territories. Once visiting the place in real it becomes evidently clear that without a close cooperation of various professions as well as cooperation of various levels of decision making such a project would not be possible. The project provided homes to thousands of people in a relativelly short period of time, following a very clear and strong conceptual framework for the functional and spatial organisation of space, which would not be possible without a trans- and inter-disciplinary cooperations. On the other hand some questions have arisen too while visiting the place – the dimensions are huge, the densities very high, the built structures even looked brutalistic at some places to me – I started to question myself how the humanisation of the built environment was defined back in 1970s? Maybe this feeling was made stronger due to the fact that large parts of Split III are covered by parked cars due to the obvious motorisation issue in the city. Some of the conceptual and design solutions of Split 3 would most likely be questioned in terms of their (un)human-friendly nature through the contemporary interdisciplinary lenses. Even if the whole urban area is stil relatively well equiped with services and daily amenities, some places look alienated and far from human friendly.

One of the main lessons learnt out of the Split STSM experinece would thus be that the link between the university and the city is crucial to make the two benefit from each other. Split II project is a clear example of this. The case of Split also shows the importance of keeping the inter- and transdicilplinary cooperation ongoing  in order to avoid the initially well-thought urban development schemes to get hit by time. The lucky part of the story for the Split case is that the different disciplines contributing knowledge and skills needed for comprehensive urban development are still joint under the same roof and already developing new curricula to equip the future urban planners to be equipped for such a challange.

An STSM was undertaken by dr. Matej Nikšič of the Urban Planning Institute of the Republic of Slovenia at the Faculty of Civil Engineering, Architecture and Geodesy in Split, Croatia