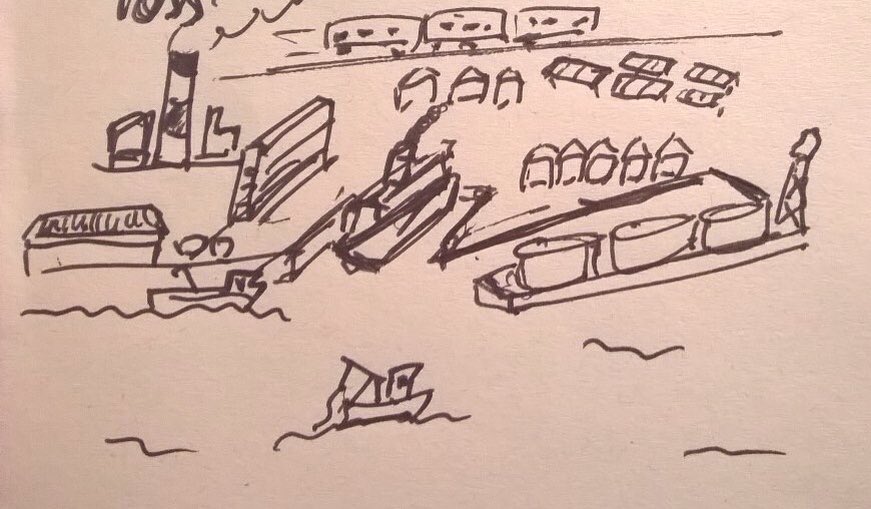 I have never really thought of myself as an ‘urban’ researcher. So when the call for applications for the Barcelona Training School on Inter- and Transdisciplinary Urban Research came out I really wasn’t sure if I would have anything to contribute – much as I found the topic interesting. However, taking a step back I realised that my UKCCSRC (and now Regional Studies Association)-funded work in Tomakomai in Hokkaido, northern Japan fits within the remit of urban research. After all, whilst my initial focus with that project was low-carbon energy and climate change mitigation technologies, it quickly became apparent during the fieldwork that one couldn’t assess the technology without understanding the society, culture and history of the 173,000 people living in Tomakomai City itself. And more than that, when undertaking the research I’d collaborated with marine biologists and geologists, as well as working closely with national government, municipal government and industrial operators in order to be able to set up the fieldwork.

And so it was that I came to find myself in Barcelona in mid-February, discussing a transdisciplinary urban research project I had conceived and undertaken without even realising it. By way of context, I have become very interested in the idea of ‘just transitions’ for cities and regions whose economies and employment bases rely on carbon-intensive industries. In other words, what happens to the places – and the people within them – whose industries have to close or downsize in order to meet our climate change obligations? Tomakomai is just one such place, an industrial city on the southern coast of Hokkaido, and I have become very interested in the role carbon capture and storage (one specific low-carbon energy technology) might play in that transition by helping to reduce emissions from electricity generation and industrial operations in the short- to mid-term. I’m also getting interested in the longer-term role of spatial planning and land use in realising a just transition, but that’s a longer-term objective. But to assess these processes, we need both physical science knowledge (to know what is technically feasible) and social science expertise (to understand what is socially acceptable and desirable) – plus of course cooperation from industry, government and society to put it all into practice. As such, thinking about just transitions really does require trans- (or at least inter-) disciplinary research.

But enough about Tomakomai. At this time of year, Tomakomai is freezing cold, snowy and serving delicious seafood. Barcelona, by contrast, is warm, sunny and serving, well, delicious seafood. Over the four days of the workshop, under the guidance of expert trainers we learned about five competences which are seemingly key to transdisciplinary research. Now, I am going to test myself here by trying to write a one-sentence definition of each, so huge apologies to the trainers if I have mis-understood or mis-remembered what these precisely mean! As I understand them, the five competences are: systems thinking (how does the whole system connect up?); anticipatory (where do we want to end up in the future?); interpersonal (how do we initiate fair and inclusive decision-making processes for our group or society about our objectives and processes?); strategic (how are we going to get to where we want to go?); and normative (what are the ethical and moral issues around our aims, and what is an appropriate course of action?).

As well as lecture-based work, we had workshop and practical sessions in which we had the opportunity to assess how these competences might play out for the design and execution of our case studies. I have to admit it was perhaps not sensible for me to use a case study based on climate change mitigation technology and its deployment, for my collaborators and I have been working on exactly these kinds of questions for the last five years or thereabouts through a science and technology studies lens. So although this familiarity with the theory helped me to get a handle on what the competences looked like in practice, it might be fun in future to push myself a bit more by trying to apply the competences and roles to, for example, the other new collaborative work I am involved in on greening in Taipei.

On the subject of greening, it was green space that provided one of my highlights of the week. This was the contribution from Barcelona City Council on their climate adaptation and resilience initiatives. This entailed some very interesting afternoon and early-morning lectures on urban heat islands and also on the development and deployment of green infrastructure, among other aspects. However, it also involved a field excursion to a ‘Super Ila’, a new planning initiative aimed at reducing road traffic by closing off roads and ‘reclaiming’ the streets. Given my emerging interest in urban greening and cooling, it was fascinating to see some of the green walls and street trees being planted as part of a green corridors initiative. I was also very interested to see a district cooling station – working on the same principle as district heating, this takes cool air from the sea and then circulates it around adjacent buildings. Our visit was rounded off with a visit to an architectural studio, which has been engaging with citizens to imagine future configurations for public space in the Super Ila.

From a critical social science perspective, I am always very sceptical of being shown ‘best practices’. As such, it was refreshing and encouraging to see Barcelona City Council openly admit there are things they could have done better with the Super Ila they took us to visit. Three of their staff returned the next morning to listen to our comments and concerns about their spatial planning for climate change actions. This reflexivity and willingness to open themselves up to critical scrutiny impressed me greatly.

Mountains of theory on interdisciplinary research, and a good blast of critical urban social science to round the week off. Just what I need to set me up for the tough year of researching, writing and thinking that lies ahead, particularly with a couple of new urban sustainability projects on the horizon.

You can read more about Leslie’s work on his collaborative blog – urbangreenadaptationdiary.wordpress.com