“A system is an interconnected set of elements that is coherently organized in a way that achieves something … it must consist of three kinds of things: elements, interconnections, and a function or purpose”1 In addition to this, it is always necessary to delimit the boundary of any system. The latter is not a banal issue, especially when dealing with social systems, as it implies a normative stance to decide what is in and out of the system under concern. The benefit of systems theory remained mostly in the realm of computers and communication technology. Computer models have been developed and applied to study urban systems, but despite the inherent logic of system thinking, governments, corporations foundations, universities, and non-profit organizations still work mostly by breaking issues and problems into their separate parts and dealing with each in isolation. Systems modeling, for example, allow us to anticipate and understand the looming catastrophe of rapid climate change, but continued systemic failures in government, policy making, and economics cripple our ability to do much about it.
A system perspective to urban governance is not a panacea, but it offers concrete possibilities to improve it, if coherently applied to: a) organize and analyze data (and “big” data).
b) educate a citizenry to understand the relationships between its behavior and its environmental and economic prospects.
c) improve the quality of urban decision making by increasing the understanding and awareness of unintended consequences of actions undertaken in isolation.
d) build new communities and organizations around common visions and shared purposes.
e) help people and decision makers to be more reflexive and responsible in what there are doing (in Peter Senge’s words, “everyone shares responsibility for problems generated by a system”).

What system and anticipatory thinking teach us about how to better manage urban regions (and more in general complex territorial systems)? To start responding to this question, the aim of this session is to present some key concepts of systems thinking and a
conceptual tool to help framing future thinking in a systematic way: the Tree Horizons Model. How can people with widely varying backgrounds, expertise and, and worldviews come to a shared vision of the future? How can we work constructively with the problems our
society faces that defy analysis and demand that we learn our way together into the future, respecting both our knowledge and our ignorance of what to do? The Three Horizons framework is emerged as a way of helping people to cope with these challenges. As people can use it individually, they can also use it together to develop a shared future consciousness. For this purpose, another useful tool is Future Search.
The participants will gain knowledge of the Three Horizons and Future Search methods, and will gain experience in particular by testing the Three Horizons Model in the group exercise (while testing the Future Search is out of scope, due to the limited time available).

Outline of the session

A simple linear way of thinking about change places us in the present moment looking towards how we want things to be in future – placing the future far ahead, outside the present moment. The central idea of Three Horizons, and what makes it so useful, is that it
draws attention to the three horizons as existing always in the present moment, and that we have evidence about the future in how people (including ourselves) are behaving now. The exercise will allow the participants to play this Three Horizons mind-game, thinking which potential futures are ahead and what of them is already evident in the present moment.
Four case studies will be selected by the participants to play as many future thinking exercises, and the participants divided in four groups. Each group will have a Three Horizon Sheet to fill in with the results of their discussion, describing the features of the three horizons. The whole exercise will take about 60 minutes (e.g. each horizon discuss can take 20 minutes).

The participants will consider how the lessons learned from this workshop will influence their analysis and interpretation of their selected cases. 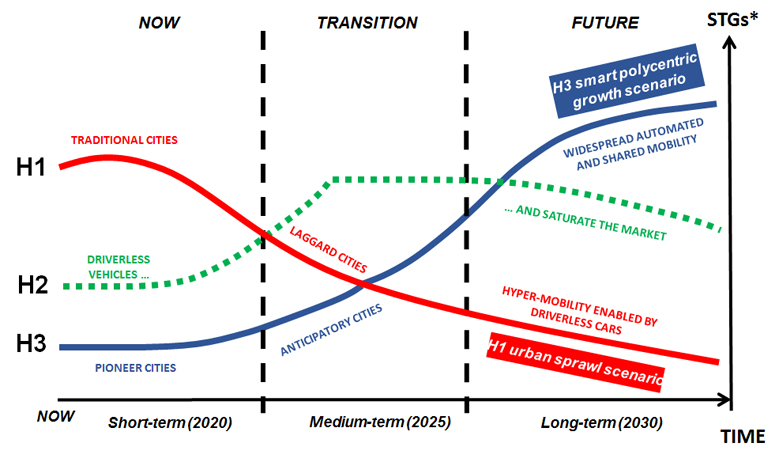