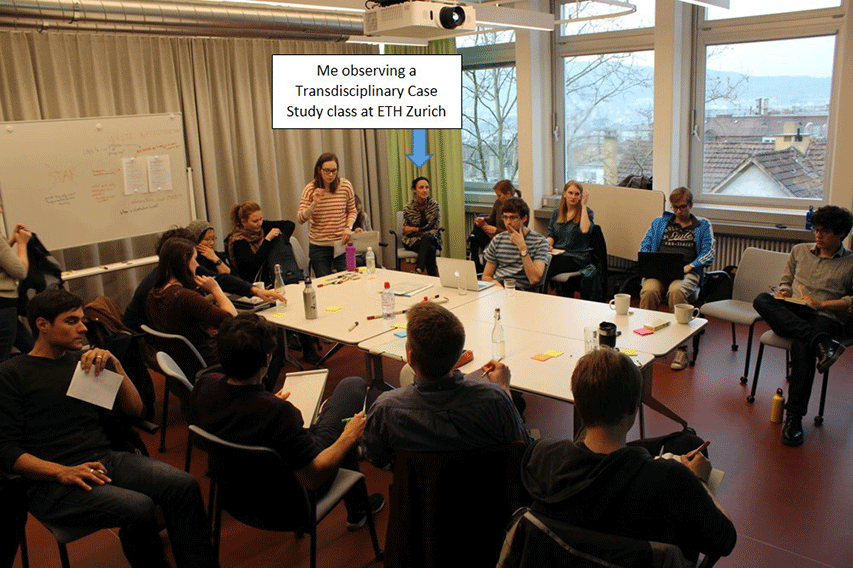 Having a CV that includes a degree in marine biology and research developed in economy, sociology and participatory approaches, I have struggled with the above question since my first research project. Along the work I developed so far, I navigated between several disciplines to build up knowledge for dealing with sustainability problems. Such navigation is not common in the academic context I am part of, which brings a quest for identity frequently observed in many other “trans*” contexts. The visit to the Transdisciplinary Lab at ETH Zurich has been an important step in building up the identity I need to further develop my main research interest (and passion).

At TdLab I had the possibility of exchanging thoughts with different personalities that can be roughly distinguish between: a) researchers firmly anchored within a disciplinary context, also developing inter and transdisciplinary research and b) others firmly anchored on the integration question: How to actually co-produced knowledge? This typology of researcher isn´t moved by the research topic (i.e. climate change, biodiversity lost, landscape changes, urban development), method, theory or framework. Such researchers are not experts on biology, anthropology, geography, economy. The wheel of their research is the inter and transdisciplinary research process, how do we collective frame the problem in analysis, how to we identify the knowledge needed, what is implicit in the existing knowledge that needs to be made explicit, where do we need reflection, how do actually integrate this knowledge toward the co-creation of a new knowledge that can be clearly identified as progress. Progress in the scientific realm as well as in the society realm. The sole identification of this rough typology was an important step for me. Further, I couldn’t fit all personalities I met and interviewed in one of the two types and many are in between. As I realized the existing diversity, richness and validity, the question about where do we fit-in became increasingly unimportant. Maybe we fit-in a community of practice or a new discipline, or new (un)discipline. Haven´t found the answer. Yet, as this question became less important, the interest on the scientific discussions around transdisciplinarity theory and practice took over.

In this Short Term Scientific Mission, I had the opportunity of realizing the diversity of ways transdisciplinarity is used and appropriated, the advance made so far, as well as, the current difficulties in moving forward. Although fuzziness is the pavement in which we move, it became clearer for my personal professional career which way I personally want to move. Co-construction of knowledge to deal with real world problems is a risk taking activity for young researchers aiming at an academic/researcher career. TdLab can be seen as positive and comforting example of a change in the academic paradigm from a highly specialized driven environment to one that also includes those specialized in co-creation of knowledge. Yet, TdLab is part of a niche which might continue as such or hopefully will became part of the stablish regime.

Although funding schemes was not the target of this STSM, the impressions collected clearly identify the urgency of promoting such space in the current academic context. Science with and for society is increasingly demanded and funded yet the capacity for dealing with such demand has not yet permeated the research teams proposing to answer to such call. The lack of competence in transdisciplinarity in highly competent teams might induce an increment of the currently existing “existential question” of transdisciplinarity: Does it work? However, maybe the most suitable question is whether the current scientific knowledge on transdisciplinarity is sufficient and or sufficiently spread to fulfil the current demand? From my visit at TdLad it became clearer to me this is the key question which incremented my willingness to take the career risk and further engage my research in developing the quality of transdisciplinary research. Such endeavor implies working on its theoretical basis and methodological possibilities.

Finally, this STSM was fill with joy of grasping diversity, looking at complexity and further realizing that transdisciplinarity is and should always be based on trust relations between scientific realms unrespectable of the scientific “gender”. The current challenges we face need to be handled with greater scientific excellency in disciplinary, multidisciplinary, interdisciplinary, transdisciplinary or (un)disciplinary efforts. Plus, collaboration will lead us into the sustainable future we wish for.